Members of Slovenian Cerebrovascular Disease Association on a trip 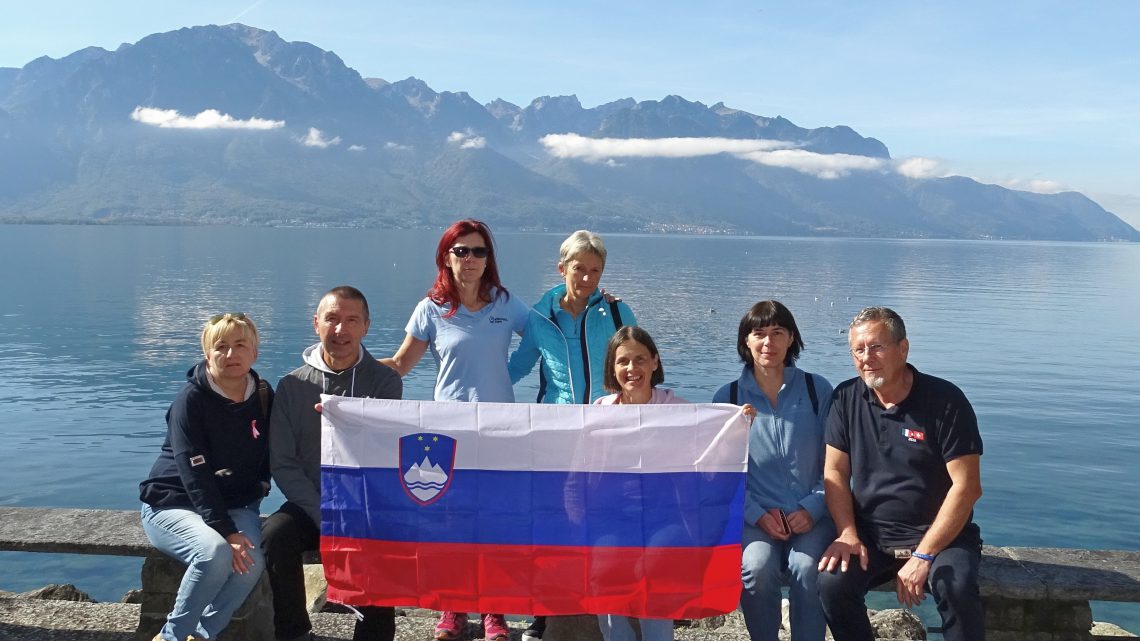 People living with aphasia visited France and Switzerland and proved that speech itself and different languages ​​are not an obstacle, only the will counts!

On the morning of October 1, 2022, seven members of the Sports and Party Section of the Slovenian Cerebrovascular Disease Association, went on a five-day trip. The purpose of the trip was to visit the president of people with aphasia of France and the neurological clinic in Friborg, Switzerland, to learn first-hand how patients with aphasia are treated there. However, the trip gave us much more.

We traveled the long way through Italy, France and Switzerland in a rented van, that was driven perfectly by Sabina. We would like to thank her for her help in organizing the route, for a pleasant ride and for her ingenuity and handling of stressful situations. 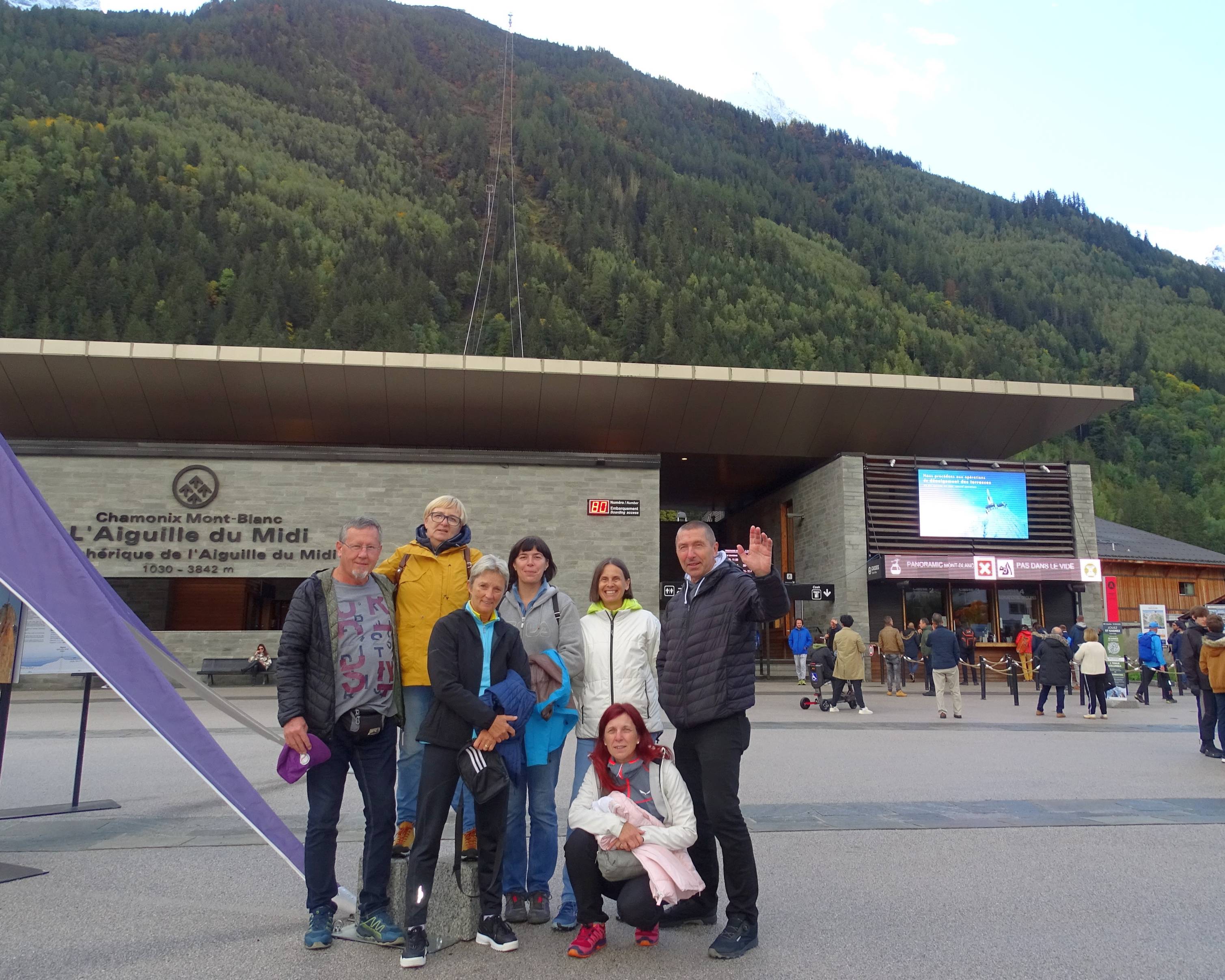 Members of the Sports and Party Section of the Slovenian Cerebrovascular Disease Association in Chamonix, France

On the first day, we drove almost nine hours to the first stop on our trip in Chamonix, France. Because it was raining, we didn’t see the city until the next morning, when it cleared up. We caught the moment when the majestic Mont Blanc peeked out from a bed of mist and completely mesmerized us. We also wanted to see it and experience it up close, but the gondola was not running this day due to technical problems. 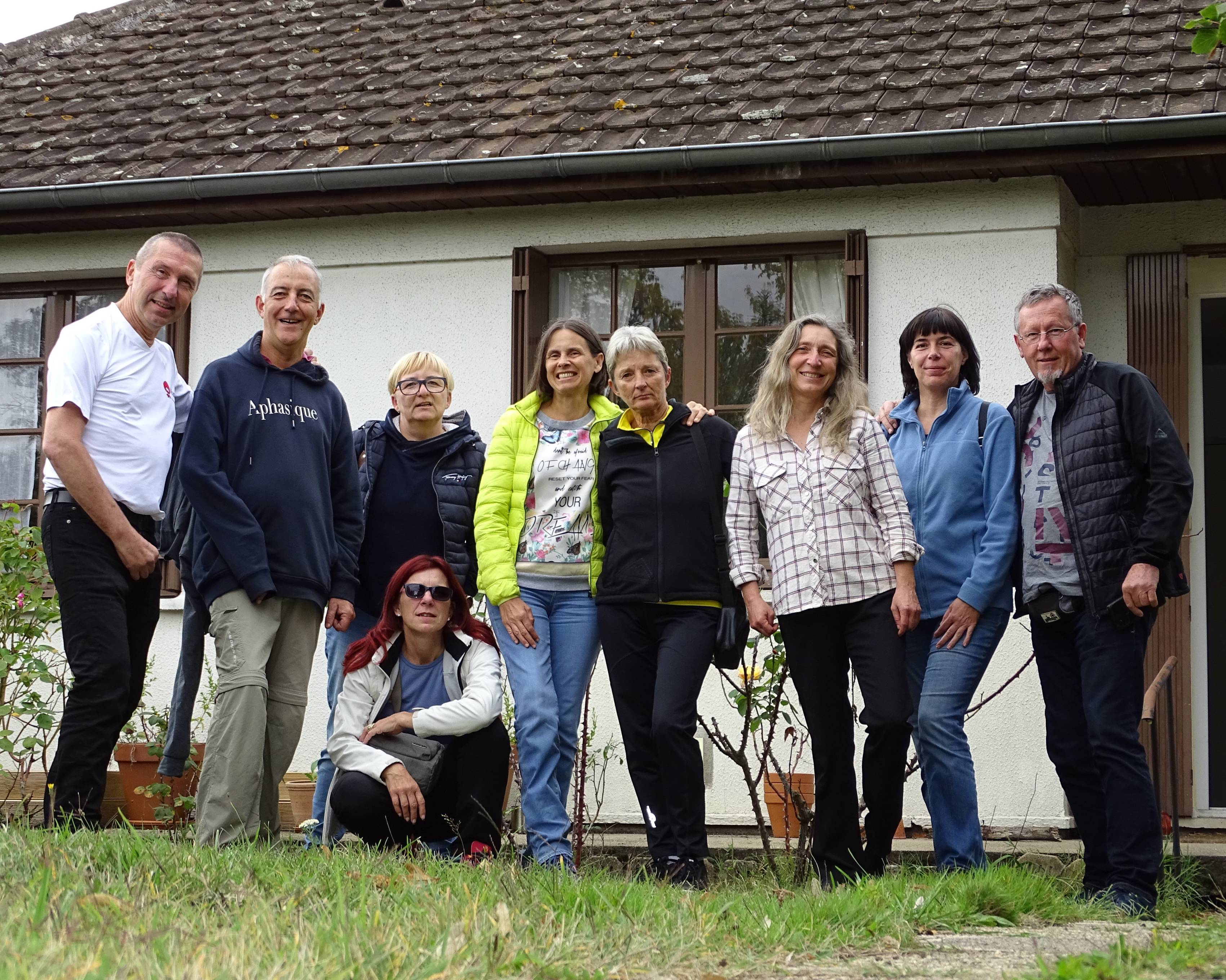 The second day we continued our journey through France. During the four-hour drive, we enthusiastically tried to photograph the castles that appeared along the way for just a moment. We stopped in Dompierre-sur-Besbre, where the president of people with aphasia of France Jean Dominique Journet and the aphasist Christine Coulombel Travet live. Although none of us speaks French, and the two of them do not speak Slovenian, we understood each other surprisingly very well. I hope! Google translator helped us too. Although we had quite a few laughs about it, it was quite time-consuming to write the whole conversation. Eventually we all relaxed and real communication started. We started to talk in language that we called English, Italian, French and in the language that makes children understand each other, even though they speak different languages. The excellent dinner that Christine prepared for us contributed to the pleasant and happy gathering. She introduced us with some French dishes, wine and cheese and told us from which region they came from and how to prepare them. We are also very grateful to the hosts for organizing an overnight stay in the village house, which has been beautifully restored for visits and events. 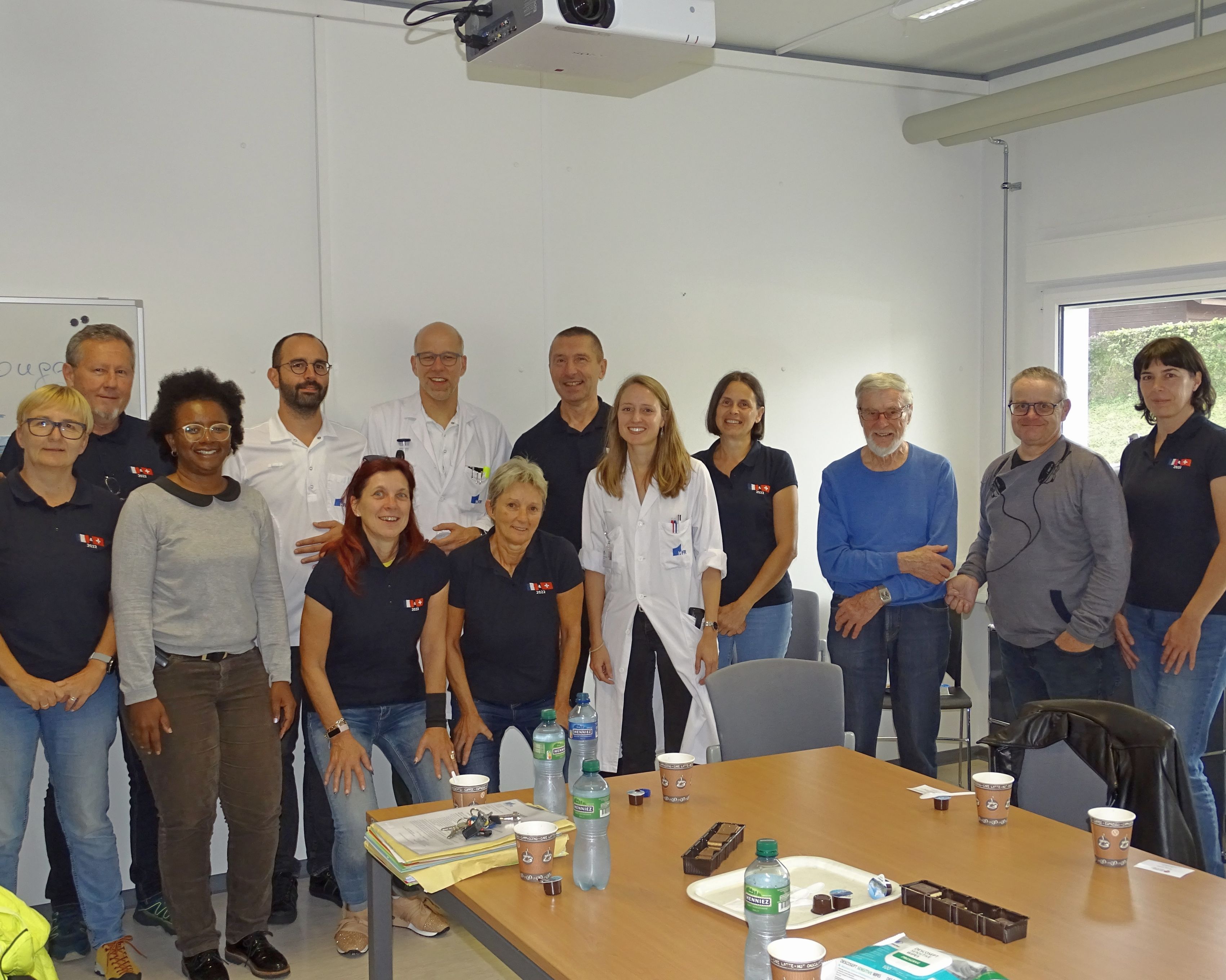 Members of the Sports and Party Section of the Slovenian Cerebrovascular Disease Association in Fribourg, Switzerland

On the third day, after breakfast, we all visited a local bar together. After coffee and group photography, we said goodbye to our hosts and continued our journey towards Switzerland. We arrived in Friborg in six hours, and Google proved to be the best guide. This time he brought us to the neurology clinic. The young speech therapist Natacha Dutch, who works intensively with aphasics, was already waiting for us there. In the room where the people with aphasia hold meetings, we met the president of people with aphasia of their canton, a fellow with aphasia and two neurologists. The conversation with them was translated by Natacha this time, and we talked to each other in English. We had an interesting conversation about the care of patients with aphasia and compared it with care in Slovenia. We can be proud of Slovenian achievements! But we would still like to achieve their level of care, especially in the duration and frequency of hearings and the insurance system. 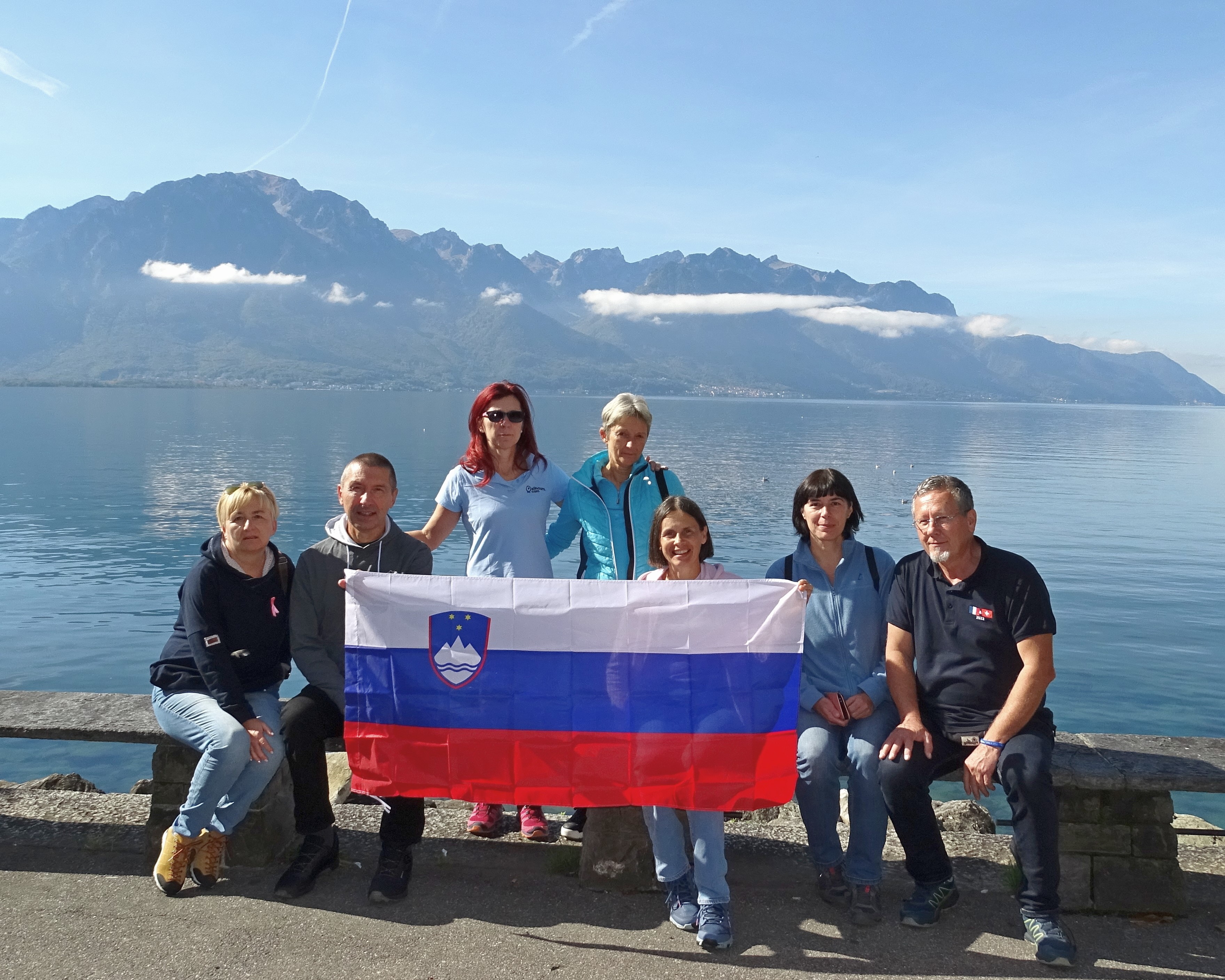 Members of the Sports and Party Section of the Slovenian Cerebrovascular Disease Association in Montreux, Switzerland

When planning the route for the fourth day, we decided to visit Montreux, a historically fashionable city on the great Lake Geneva, known for its cultural festivals. Those who know Switzerland for skiing and snowy peaks would be very surprised to see palm trees, lemons and oleanders there! We continued our journey to Lugano. We have chosen a longer route, which was three hours faster! Along the way, we admired the beauty of Switzerland, it’s lakes and many tunnels, of which the 17-kilometer Gotthard is the most interesting. Through this tunnel we got to the Italian part of Switzerland. After a five-hours’ drive in the late afternoon we arrived in Lugano, which lies by Lake Lugano. The place was once called the Monte Carlo of Switzerland. We would call it the Swiss Portorož. We spent the night in a beautiful old hotel by the coast. Some of us also had a terrace with a view of the lake. The problem with communication was solved by the receptionist Kristina, who speaks Serbian. This made much easier for us to arrange accommodation and dinner. In the evening, we were surprised by an alarm! Fortunately, it was a fake one. It was interesting to observe my own and other people’s reactions. Do you know what you would do in such case?

On the fifth day, Franci mentioned that the way home took us past Monza. We immediately agreed to go see the racetrack, which is known mainly for Formula 1. We managed to drive directly into the center of the racetrack, where we saw the finish line. Over coffee, we reviewed and settled the expenses, and then continued the six-hour drive back home.

Thus, Sabina travelled almost 2,500 kilometres. Well done Sabina! This journey would not have been possible without you. Thank you for everything.

A true “aphasic” wandering is behind us. We travelled along the planned route and saw and experienced many unplanned things. We tried ourselves in communication, experienced human openness, and warmth, got to know ourselves and others that we met on the way. In addition to the beauties we admired, the greatest treasure is what we learned, became aware of, what remained in our memory and in our hearts. And that’s quite a lot!

Jernej, thank you for this wonderful experience! All the best, gang!